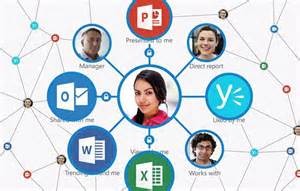 Delve is a new feature of Office 365 that Microsoft has been rolling out to First Release customers since late October.  Its a new search capability that proactively gathers content that may be of interest to you and presents in on “Cards” that provide additional information about the content.  Office Graph is a machine learning engine that is used to analyze the interactions that you have with content and other people in your normal workday.  Your actions are combined with the public and private actions of other people to surface trending content that the analysis engine thinks you may be interested in.  There’s also a search feature so you can impose the relevance ratings reflected by this analysis to regular search queries that you would perform.  All of this is designed to proactively surface content from wherever it may be stored that will be of interest to you Now.

Delve is still evolving to include more actions, content sources, and features. Today Microsoft released a new feature for Delve called Boards.  Boards makes it possible to Tag individual Delve Cards and then surface that collection of Cards as a “Board”.  You can follow Boards to make them easy to retrieve or search for Boards defined by other users.  You can read all about it in Microsoft’s announcement here.

If you would like to learn more about Delve sign up for the Louisville SharePoint User Group Virtual event tomorrow evening at 6:00PM.  I’ll be presenting a session for them on an Intro to Delve and Office Graph.  You can sign up for the session here: